“Straight to your face, tougher than a Spartan, heavier than a bulldozer, louder than a chainsaw” that’s the way Bring On The Bloodshed describes their sound. From around the Dutch capital of Amsterdam, this face melting heaviness comes to destroy your speakers. But does ‘Amonst The Ruins’ also contain some music? Or did they record mostly noise? 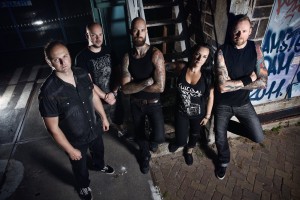 As you might have noticed, I’ve grown quite a bit on the aspect of heavy music in the past year and a half I’ve written on Overall Loudness. There have been some doom, some metalcore and some death metal albums that I really liked. But this is different, in some way. As a listener, I just don’t seem to be able to get into the music Bring On The Bloodshed makes.

Through their own label, Nocturlabium Records, the band released their second album in three years’ time. The follow up on ‘Dark Clouds’ is called ‘Among The Ruins’ and contains nine tracks with a pretty heavy cross-over between metalcore and black/thrash metal. With mid-tempo riffs and growling, screaming vocals, the band tries to remain the holder of the world record “ripping your eardrums to pieces”. 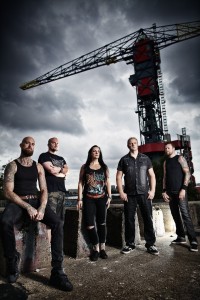 Bring On The Bloodshed, when the shoot is done.

But for me, personally, this is hard to enjoy. I can very well see people enjoy this, and see this work out great when performed live, but it misses something. The first problem has to do with mid-tempo riffs. Almost every riff seems to be slow driven, distorted waves of sound that tend to stay the same throughout entire tracks. And even within the entire album there are moments that sound similar. It makes it difficult to distinguish different songs.

Problem two has to do with the lyrics. There are times in which there’s very little to make out of vocalist Rogier’s lines. And when you can actually hear what he’s going on about, it’s most of all about pain, death, destruction and despair. In short, everything that you can find in the tracklist below. But a song like ‘We Are The Fearless’ has moments in which it’s just repeating the song title.

Therefore I will stop this review with this. Lots of people will probably enjoy this at shows and festivals, or even at their lovely homes. These nine tracks are simply too much, which could also be a compliment to Bring On The Bloodshed. They’ve got a sound, they’re building a fanbase and, who knows, maybe the follow-up on ‘Amongst The Ruins’ might even appeal to people more, we’ll see.