Coal Chamber’s latest album ‘Rivals’ might not have been the greatest piece of music ever made, it was never a terrible album. It was solid, it was powerful, but it was still stuck in the nineties. When I got the offer to come and see these American Nu-metallers in the Melkweg venue in Amsterdam, I just couldn’t say no. So there we were, bloody Monday the first of June, to see Coal Chamber, SOiL, Diablo BLVD and the relatively unknown Blood Runs Deep. It was one hell of a night. 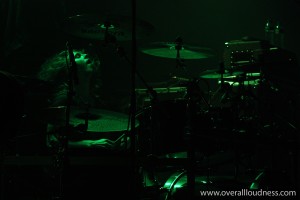 When we arrived at the Melkweg opener Blood Runs Deep had already taken the stage. Their gothic doom metal already rages through the cloakroom. It’s a Monday night and that will be clear to the bands soon enough: Blood Runs Deep plays for about forty people.
Four guys got the stage, with a huge drum kit blocking the middle and a keyboard blocking the outer right side of the stage.

This way the band is as static as a band can be, they have no room to move around and it’s almost impossible to have some extra interaction with the audience.

Their slow, distorted metal is hard to follow. Most of the vocals get lost in the riffs and the keyboards have completely disappeared. The solo’s are haunted by an echoing effect, making it sound weird. During these strange solo’s the keyboards entertain the background with some very spacey sounds and bleeps. It’s an uninteresting combination that just don’t fit the doomy metal Blood Runs Deep play.
The first band never attracts too much people and there is no one to blame for that.

After a short stage make-over Diablo BLVD takes the, still small, stage. This Belgian band, led by comedian and vocalist Alex Agnew, starts entertaining the venue right away. With fun and movement Agnew makes most of the small stage space that he has. One quarter of Melkweg has been filled and these two hundred people see Diablo BLVD rock the stage.
They clearly don’t hold back, at all. Heavy riffs, fast solo’s and the vocals tackled full on, the band is very convincing.

At first the audience stays back a little, but Agnew beckons them to come forward. After a couple of tracks they slowly move forward, guided by a couple of jokes with a Belgian accent.

“Come forward and go push people around that you don’t know. It’s cool!”
The music is very solid and well balanced. Only some of the solo’s slowly get overruled by the heaviness of the riffs. Vocally Agnew sounds like Five Finger Death Punch and a bit of Godsmack at times. His performance looks very inspired by Sabaton’s Joackim Bróden.

The catchy title track of their latest album ‘Follow The Deadlights’ features a little drum solo and ‘Behind The Veil’ has a nice groovy riff. During the show the audience is not really getting wild, but it’s not like Diablo BLVD didn’t do its best. Close to the end of the show a short sing-a-long changes that, leaving the audience singing out loud with these Belgians. A nice warming up for SOiL and main act Coal Chamber.

Last year I saw the nu-metallers of SOiL rock the stage of Tivoli de Helling in Utrecht. It makes it difficult not to compare the two shows. Soil hits the stage during a short intro made of samples from tracks. Opening with ‘Loaded Gun’, from the latest album ‘Whole’, the music have not been adjusted right. Vocalist Ryan McCombs drowns in the music, while the backing vocals on both sides are way too hard. It occurs to me that McCombs might have been rolling around in the Amsterdam delights, because he reacts pretty weird and under influence. He randomly skips the first two sentences of the ‘Loaded Gun’ refrain.

That’s not the only problem that McCombs has. His clean vocals are close to terrible, while his brawling is pretty much alright. He makes a minutes long story about someone in the audience saying “Whoooo” and he just can’t hit the clean notes right. At ‘My Own’ the intro is sounds out of tune, but still moves a lot of the audience. People have clearly been waiting to see Soil live and they are enjoying themselves very much. During the show, the backing vocals stay up front and the main vocals keep drowning in the music.

The music is played very well, everyone, except maybe of McCombs, seems to do their utmost best to play the tracks. McCombs keeps skipping parts of the vocals, which are taken care of by the less impressive backing vocals. The clean vocals on ‘Redefine’ are ruined again and also the brilliant track ‘Unreal’ is very disappointing. One track that has to be played, during the show, is the biggest hit ‘Halo’. McCombs walks off stage and goes singing from among the first rows. Most of its refrain is shouted by the audience, which makes it easier for McCombs to back down.

Closing the show is an amazing band-showcase, a cover of Ram Jam’s ‘Black Betty’. The original song is a very impressive piece of work and it was done very well by Soil. You would almost forget the flaws of the show.

After the somewhat disappointing, but energetic, Soil show Coal Chamber takes the stage. It’s still a Monday night, because the venue is only half to three quarters filled. Apparently this isn’t a problem for Coal Chamber, because opener and hit ‘Loco’ gets the people moving in one big moshpit. It shows how ready the audience is, but also how empty the Melkweg actually is.

The band is ready for the evening, front man Dez Fafara is smiling when he sees the audience go nuts, bass player Nadja Peulen is spinning around with her bass guitar and drummer Mike Cox is wearing himself down behind the kit. Everyone, except for guitarist Meegs Rascon, is moving around. Rascon is standing there with a face like he has to focus about everything he does.

The third track is ‘I.O.U. Nothing’ from the new album ‘Rivals’. It matches the older tracks very well and that proves my point made in the earlier ‘Rivals’ review. All new songs are back to the nineties, without a doubt. It holds the ingredients to make an evening into a back to the nineties party. That is what happens in the Melkweg as well. Everyone is ready to see the old Coal Chamber perform again. Even the lesser known tracks are accepted with cheers and moshing on this solid metal evening.

During the preparation of the stage we spotted a megaphone that was installed onstage. The entire track ‘Rowboat’ is sung through this megaphone, decorated with white led lights. It sounds surprisingly good and the lights add a special little touch to the appearance. Most of the tracks are pushed through one after another, without a lot of talking and nonsense in between. ‘Not Living’ is announced shortly and especially ‘Dark Days’ makes the audience wild.

When a track of the first demo and album arrives, ‘I’, we hear the first sentences spoken to the people. A short recap of the metal scene in California in 1993 follows. Musically it was all dead, Dez recalls, and Coal Chamber was a young band to do their thing. Rascon uses some sort of effect microphone on this track, which makes a terribly sharp noise during the song. It’s a really annoying sound to listen to.

Bassist Peulen is taking a short break while hanging on the amps and drummer Cox has left the stage while his drumkit is being dried. He has been sweating so much during the show that he had to be sprinkled with water by a roady. The second, and last track from the new album, the title track ‘Rivals’, is played and this track also matches the tracklist brilliantly.
During ‘No Home’ the audience slowly starts relaxing from all the moshing, but Dez has them back in action with a couple of simple movements. He almost radiates power and energy, which he easily transmits to the fans.

With two old hits Coal Chamber makes its way to the end of the show. ‘Oddity’ is accepted with enthusiastic singing of the refrain. Dez doesn’t want to leave the stage for an encore, the band just stays on stage, because “Encores are for Rock Stars man, we don’t do that.” Final track ‘Sway’ is an amazing closer, with the biggest moshpit of the evening the audience is worked to sweat one more time. The band greets the audience, takes a picture with them and leaves. Leaving the worn out fans for who they are. It was a brutally solid and powerful Coal Chamber show. As Dez would say: “This is the way it’s got to be!”