Is it possible to fall in love with a voice? Not the physical kind of love, of course, but the sound, coloring and timbre of someone’s vocals? To me the new album by District 97 has definitely made an enormous impression. Some of the female vocals that grace the new record called ‘In Vaults’ are simply electrifying. Will we be able to salvage more than just the vocals from this record? 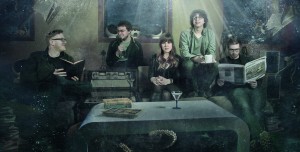 District 97 is a band that we can brand talented, to say the least. The four musicians that skillfully play their instruments have toured as an experimental and instrumental rock band, but decided they needed a vocalist. After some thought they decided to go for Leslie Hunt, who achieved a top ten spot in the 2007 edition of the vocal contest Idols. With the replacement of original guitarist Sam Krahn by Jim Tashijian the current line-up was complete.

Let it be no surprise when I tell you that when District 97 started a crowdfunding campaign, the project was funded in no time. The music is absolutely different from most bands we already know. Hunt graces the album with her brilliant vocals, while talented guitar player Tashijian lays an amazing foundation of riffs and fills in the solo’s. Clearly a lot of people had faith in the completion of ‘In Vaults’, leading to a fast funding of the records expenses. 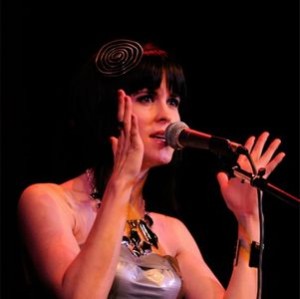 Do not let the first two songs get you down when you start playing the record. I was fairly stricken by opener ‘Snow Country’ and the following ‘Death By A Thousand Cuts’. The band seems to want to record a little too much progressive elements. It’s absolutely possible to create and record a prog album, but without all the unnecessary changes in rhythm and strange bridges with riffs shifting from the left side to the right side of your headphones.

When you finally make it through to the third song, the record has actually begun. ‘Handlebars’ is an excellent example of how a progressive song can also be. It’s a modest track, infused with some lovely jazz elements. The entire song is drenched by the wonderful vocals of miss Hunt. And with keyboard player Rob Clearfield doing an amazing job by elevating the track to higher quality, without ever overdoing it.

The real love for this album is based on three tracks. First there is the enchanting ‘A Lottery’ that leaves the listener completely hooked to the album. It’s a joy to listen to this track and it never bores, how many times you might listen to it. After that there is my absolute favorite: ‘Takeover’. It’s a groovy track with one of the best refrains I ever heard. Completing this trio of fantastic tracks is the ballad ‘On Paper’ that just kindly ripples on and on, but it holds an extremely powerful bridge with an amazing solo.

After listening to this album it became clear to me that it holds a couple of true gems, while also being disappointing at times. The band wrote a track called ‘All’s Well That Ends Well’, somewhere in the middle, but unfortunately the record doesn’t really end well. If they manage to make songs as good as the three I mentioned above, why can’t the closer ‘Blinding Vision’ be as stunningly good? It’s eleven minutes of disappointing, slightly boring music. It leaves a very unsatisfied feeling, only leading to repeating the brilliant tracks over and over again.