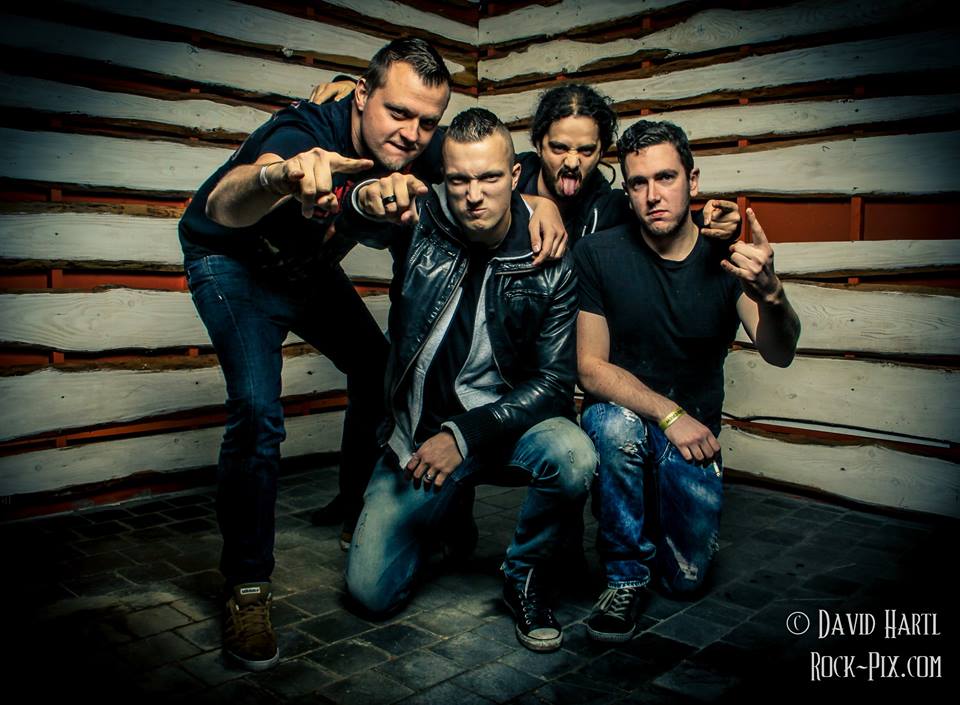 Last year the Belgian Thrash Metallers of Guilty As Charged released their debut album called ‘Leap Of Faith’. Doing everything themselves, without any help of a label at all. It’s a big step and also a great adventure for a young band like this. Hoping for a place in the Red Bull Bedroom Jam, bassist Hannes de Caluwé has found time to talk about everything that’s going on. “It all took a lot of time and it has absorbed quite a lot of money, too, but we’re very proud of what it has become!” 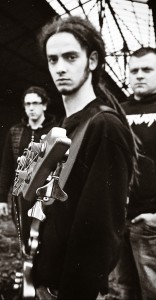 How has Guilty As Charged been doing?
“It is going very well, thank you! We played Wizzfest last weekend, which was incredible. Some more shows have been confirmed, which is also thanks to the Red Bull Bedroom Jam. I believe that we haven’t made it through to the final round. The ranking has disappeared and we haven’t heard anything yet. But it has been an amazing experience, we had to focus on Social Media, posting things and expanding our fan-base. It has been good for improving our contact with the fans and you also get to know people. You will also be contacted more now, so it has definitely been a positive experience.”

What were your expectations when you entered the Red Bull Bedroom Jam?
“At the end of the day we thought we would make it to the finals. The chosen artists are very good, don’t get me wrong, but I thought we fitted well between them. Definitely because of the sound and our live-performance. We would have loved to fight this fight on the final stage and we thought we would be getting there.
One thing that could have worked against us was the kind of genre we play. The old-school Thrash Metal is already played for twenty or thirty years and we take that style and give it a modern twist. Maybe the bookers and the jury were looking for something new. If I would have to book bands on a high level, I would also be searching for these inventive talents. People who find a new way of doing things and we, in fact, mix up all the existing music that we like, with a modern twist.”

You mention the styles that you mix, and there are a lot of them heard on the album. Which bands would you name your biggest influences?
“That is kind of complicated, because everyone has its own different preferences. Vocalist Jan (De Vuyssere) delivers the biggest influences: a bit of Metallica, Iced Earth, Guns ‘n Roses and also Black Sabbath. The old legends, really. Matthew (Vandenberghe, drums) is somewhat more attracted by Black Metal, you can find that in the drums on our record. He also played in some Death Metal bands, which is also present somewhere. And Dempsey (Derous, guitars) and I are the biggest fans of the more technical Death Metal and Metalcore. You might find a breakdown in some of our songs that might sound a bit more like that.

We all have our different preferences and influences, but we always find each other in the Thrash and Heavy Metal of the 80’s and 90’s. That is something that we all like and then we add our own personal details.”

“The band is always trying to experiment and getting to personally improve on your instrument is always a good thing.”

Doesn’t that fuel a lot of arguments and discussions?
“It causes discussions almost every time we go writing or practicing. Sometimes the guitarist will come with a riff of which the rest of the band says: “Go to another band with it! We don’t want it here!” So there are a lot of discussions, yeah. Also during the recording of the album. In the end we will find each other in the middle and we’re all proud of what we manage to create. We won’t be doing stuff that we don’t like, so were spending time to make our way around the problem and do it differently. Despite all the arguments, discussions and fights that we had, we grew really close as a band. Leaving us really close friends.” 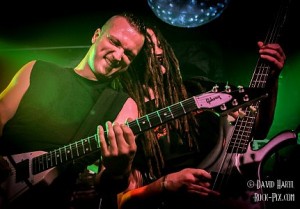 How do you deal with these different influences and musical preferences yourself?
“At the moment I’m trying to train myself to become a better bass player. With classes of Jazz bass at the conservatory. I also used to only listen to Metal, Metal and even more Metal, but with time is started to broaden my horizon a bit. Hopefully this will influence my playing in a positive way. It’s always good to get new insights that you can combine with Metal. I’m a musician over a metalhead! Opeth is a band that I’m a big fan of, but a way to combine this with the genre that we play has still proven to be impossible. You carefully need to measure the influences you bring along into the band, without causing a complete change of style. The band is always trying to experiment and getting to personally improve on your instrument is always a good thing.

I do have some side projects in which I can do some different stuff, a cover band and a hardrock band, but Guilty As Charged is my number one project. It’s the genre that is still the closest to my heart and I truly believe that we can make it the furthest with this band. I’d bet all my money on it!” 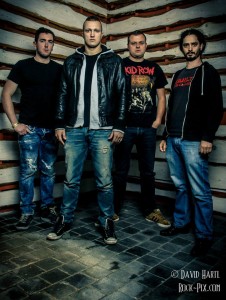 The entire album has been released without a major label. How was the independent release?
“A fair lot of the work on this album is done by the band, but we did hire some studio’s for the actual recording. The drums are recorded by the MTM (More Than Music) studio in Dessel. Bart Vennekens, known as the soundman of Iced Earth, recorded our drums. We also wanted to do our vocals there, but at the time we were ready, Vennekens had left on a world tour. So we had to do the vocals someplace else. The guitars and bass guitar has been recorded by Christoph de Bree, guitarist of After All. Finally, for the vocals, we went to the studio of the vocalist of Spoil Engine, Niek Tournois.

The last step was the mastering and mixing of the record, which was brilliantly done by Dan Swanö (ex-Opeth). We have been informing about the options we had and kind of pieced the best possible pieces together. For the artwork we searched for an artist ourselves and, when everything was done, we printed and folded everything ourselves as well. It all took a lot of time and it has absorbed quite a lot of money, too, but we’re very proud of what it has become!”

“You’ve got to take that leap. It’s the only way to get to the present elite of bands and to play the bigger stages.”

In the end you did go for a promotional bureau, why?
“Looking back on the entire process, we should have hired the promotional bureau immediately. The record was out on June the 13th and everything went pretty well. We even sold five hundred copies in the past year. But if we had the better and bigger connections, we could have been launched in multiple directions at once. Now we were launched at the release and the shockwave is slowly fading away. That could have been a bit more “Atomic-bomb style”. With Hard Life Promotions on the bandwagon and the cd already released the snowball has been rolling on. You get to know more people, who know more people and hopefully we get to pick the fruits of those connections.” 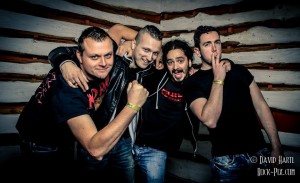 ‘I’ll Never…’ is a single with a clear message, is that right?
“The theme of ‘I’ll Never…’ was mainly the vocalists idea. He thought it would be a good idea to write a song about a child being abused by his father. While the child is growing up he slowly starts to recognize parts of his father in himself. He then decides to never become like him. The track isn’t the typical Guilty As Charged song, but it has the clearest vision. It’s a short and powerful track, which makes it perfect for shooting a video with it. We kind of immediately knew what shots we wanted to do, which made it artistically pretty easy. A video just gives makes the release of the album a bit juicier.”

What other themes and stories are present op this album?
“‘Preach To The Masses’ is about child soldiers in different wars, while ‘Last Chance’ is, quite obviously, about taking your last chance. ‘Leap Of Faith’ does got a good, solid story to tell. We decided to make that our album title, because of the parallels with the track. It’s all about a ruined world, or someone who is completely ruined and you have to leave everything behind. Symbolizing the entire creation of our album, you’ve got to take that leap. It’s the only way to get to the present elite of bands and to play the bigger stages. We want to take this jump as a band, that’s what it stands for.” 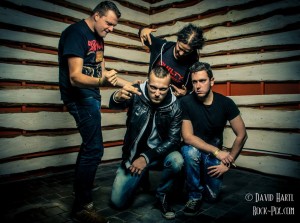 Within five years I hope to have made another album. We take a little bit longer than the average band, but that shouldn’t be a problem. Also playing the Graspop Metal Meeting and European festivals in general would be amazing. Getting caught up in that network is the bands biggest ambition.”

How is Guilty As Charged going to take over the world?
“Knowing us, the band, the world will be slowly conquered! We shall keep writing new music and in the end that’s where it comes from: the music. Everything around it is fun, but extra. You will always depend on writing that one amazing track that everyone remembers. Or making a brilliant video clip with one of the good tracks. That are the things you will be remembered by. I think that is the way to conquer the world.”

‘Leap Of Faith’ is out now. For more info, check their website.