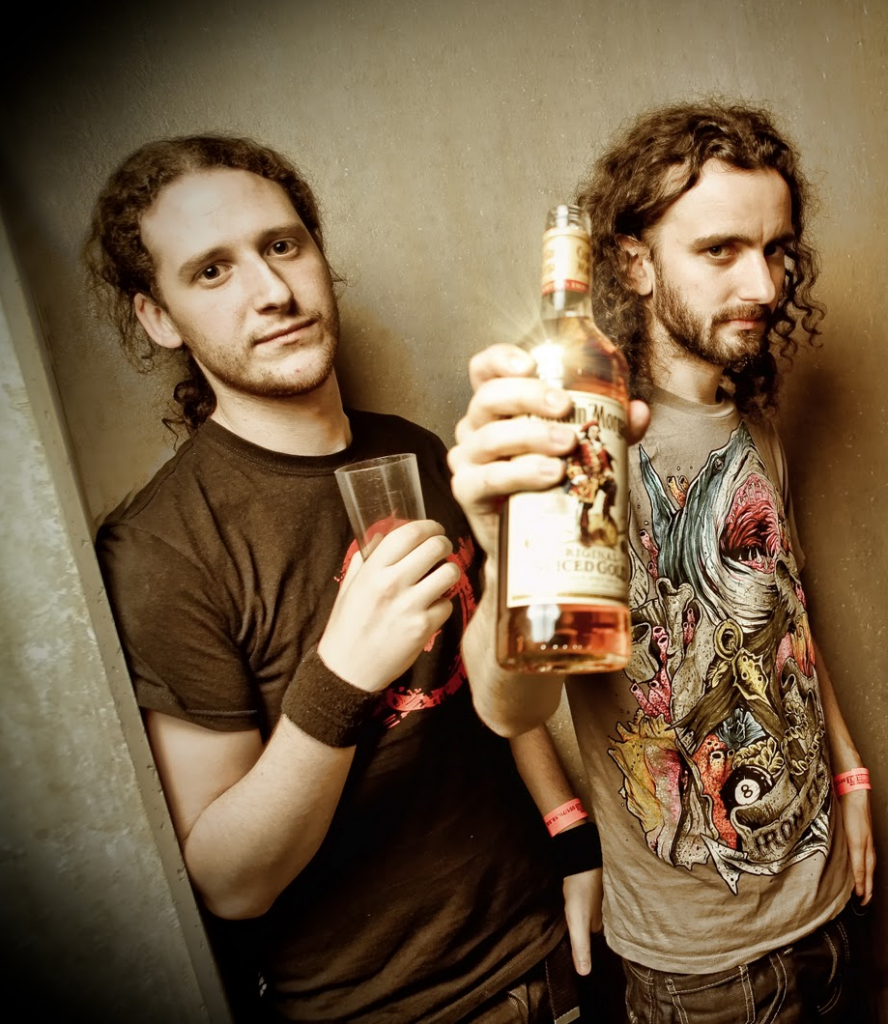 When the guys from Alestorm come to town, you kind of know what to expect. Partying, laughing and a huge amount of humor. A couple of hours before the only Dutch show in Eindhoven, singer/keyboard player Christopher Bowes and bass player Gareth Murdock shed some light on the recording of the fourth album and what may have changed Alestorm over the past couple of years. Luckily they were glad to, among other things, share some of their knowledge.

Could you describe the recording of your fourth album? How did that go?
Bowes: I think it counts as progressive, because this time we have two songs that begin with the letter ‘M’. Compared to one.
Murdock: Was there only one?
Bowes: On our last album it was only ‘Midget Saw’. I believe there were none on the first and second album. So if you would, like, plot a graph of albums verses songs that begin with an ‘M’ it really shoots up.
Murdock: Well than it is progressive!
Bowes: On the next album there will be five songs begin with the letter ‘M’.
Also the ‘M’ is in the middle of the alphabet and is a symmetrical letter, that must be some kind of power. Just like the ‘O’.
Murdock: But you can’t have to many songs beginning with ‘O’.
Bowes: ‘Ow Yeah’.
Murdock: ‘Over The Seas’.
Bowes: ‘Oypatch’ (Laughs).

All right, but a bit more serious guys, after three records you go into the studio to record the fourth one. Were things different this time?
Murdock: I think that with each album we grew up a little bit.
Bowes: Yeah, when we started we would go into the studio and I was twenty years old and I would be the oldest at the time. Still am though.

We were little children and had no idea of what we were doing and could barely play our instruments. We sort of thought that someone would decide to see a band pretending to be pirates thought “Whauw! That would be cool! We should give them a record deal!” and then we would make lots of money that way.
In the end we just got better at being a band. I think it shows as well. Our songs are more collaborated.
Murdock: Some people don’t want that, though. Sometimes they want our songs to be immature and silly.
Bowes: I notice that less and less people want to hear us play the old songs, which is good.

Does that heap a lot of pressure on you, as a band? Making the first album just being a pirate, but now under the expectation that being a pirate alone just might not be good enough?
Bowes: Yeah, we are getting to old for this.
Murdock: Well, the way I see it is: Okay, you got the people who liked it on the first one, but they probably don’t like it anymore, because they’ve grown out of it. But there’s always a new generation of kids to come along. So for every few people that go: “Actually, I’m too fu**ing grown up for this Alestorm shit”, there’s another group of kids going: “Ah, Alestorm!”. So I don’t think that is going to happen anytime soon.
Bowes: And that’s getting more and more and more. We don’t have to cater to some kind of particular fan, because we will always be getting new fans. If the old ones don’t like what we’re doing that’s their problem, you know. We still like it.

Are you afraid there is an expiration date to the concept of Alestorm?
Bowes: No. I think we can keep going. Of course musically and lyrically we will always shift. Like, we don’t plan on writing the songs of one album ten times over again.

We try not to make the songs stupid, but try to write about cool stuff. Maybe not directly about pirates.
Bowes: Like on the next album I want to have a song about pirates fighting Batman. How cool would that be? We can always ‘Shoe horn’ a pirate into any song.
Murdock: So, in that way we will never have an expiration date. We pretty much did that on the new album and the last album.

Christopher Bowes doing what he does best: Drinking and playing keys

That’s good, isn’t it? Because, I saw you at the Graspop Festival in Belgium this year and you seemed to be very much enjoying what your doing, right?
Murdock: We had a great time! It was a brilliant day
Bowes: I think that was our biggest show ever, ever. We had the best time.

But they always program us on the worst times and places. We played there four times now and we always played on a stage that’s far too small, or far to early in the day.
Murdock: Well the main stage wasn’t too small, but it was too early in the day, though. But in the end it wasn’t too early in the day, because I was expecting nobody.
Bowes: Yeah, but the bands that played after us there was nobody.
Murdock: I wouldn’t get up at 11AM to watch a band, though. I’d be fast asleep then. Or I would be sitting in front of my tent, thinking about how to deal with my hangover. I certainly wouldn’t be in the front row watching a band! (Laughs).

I noticed a change in the amount of ‘Grunts’ that you use on the next album. Why is that?
Bowes: Well that’s because Elliot Vernon, who is on keyboards now, is good in that kind of voice. I think it’s fun. It’s fun to be extreme and give somewhat more of a vocal texture to the music. You know, I am not really the worlds greatest singer. I just sort of shout equally tunefully into the microphone.
Murdock: You see we never sat down and went “Let’s be heavier on this album”. We just kind of went “Oh, this bit is cool”. If it happens to be with shouting, it is. We don’t know if it’s going to be more or less on the next album, because it’s not planned at all.
People seem to be enjoying it as well. We play a couple of bits live as well. They kind of go like “Holy Shit!” because it really kicks in.
Bowes: I don’t we are going to use vocals like that as a a regular thing. It has to be like “oh, this is the wacky bit.”.

On the last album you had a song called ‘Scraping The Barrel.’. About being out of songs to sing and stories to tell. But that’s not going to happen, is it?
Murdock: Like we said, we can keep doing this pretty well.
Bowes: What’s really fun with songs like that and the title of the new album ‘Sunset On The Golden Age’ as well. It always gives people the fear that it’s coming to an end. But it never is. It just sounds cool. I love making people worry like that.
Murdock: What happened with the new album is ridiculous. No! It’s not our some kind of clue that were going to break up or anything. That’s the most ridiculous thing I ever heard. It would be silly if we were to give up now. We are having a great time.
Bowes: The lyrics in the title song of the new album just sound really cool. It’s just a cool idea for a song and a nice sort of imagery. That’s why.
Murdock: People worry too much.
Bowes: If no one would show up at our shows that would be disastrous. But it has been a very good tour and why would I not want to do this again?

Are there still things you want to try out on a next album? Things you didn’t dare to do on the ones you have now?
Bowes: I think we did a lot on the fourth album already. Screaming vocals, lovely surf-rock riffs.
Murdock: A ten minute long song with a fu**ing progressive Dream Theater breakdown at the end.
Bowes: On our first album we were like oh my god we must make folk metal that folk metal people think is true metal. So it had to be with a lot of accordions and yo-ho-ho. And now we don’t really care anymore.
Murdock: We do what we like and happen to still like it, which is nice.

You, Chris, have started a new band ‘Gloryhammer’. Why was there the need of a new band?
Bowes: Well I think everyone in the band has a side-project that they work on. Gareth has this black/thrashy band called Dorchadas, Elliot is in this band called Ravenage, a sort of Viking folk metal band. It’s just boring to stick with just one band.
Murdock: It’s very normal to have side projects. He (Chris) just manages to his signed by Napalm Records. (Laughs).
Bowes: But Alestorm always comes first. I’ll never say “Sorry guys, we have to cancel the European tour. I have a wee show with Gloryhammer in France.”.

After the touring that you are doing now. What are the plans?
Murdock: More of this touring, for a while, I think. Because the albums literally just got out two months ago and this is the first tour. So probably the next year will be promoting this album.
Bowes: This is the last day of our European tour, then we go to the UK for nineteen shows, then we go to Japan, the USA and Canada in January and February. Then we do South-America and South-Africa and probably some Russian touring as well. Maybe Asia, back to Australia. Then maybe another European tour.
Murdock: So we’ll be touring steadily for the next few months.