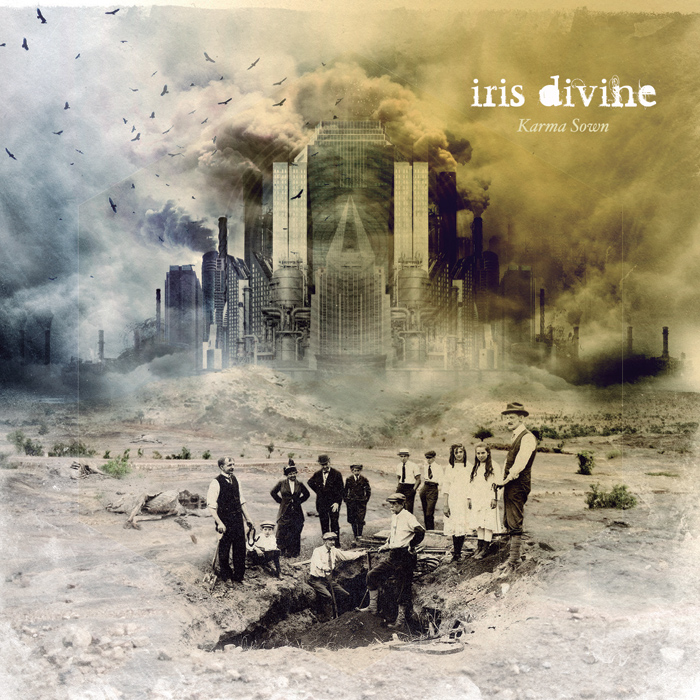 The band Iris Devine is one that has been talked about, a lot. Through a Kickstarter campaign these Americans succeeded to fund ‘Karma Sown’ and they have now confirmed a one time show with progressive giants Haken. Fans of progressive rock and metal have been talking about this band. Let’s find out if they can deliver.

Well, for an anticipated release this is quite a disappointment. ‘Karma Sown’ misses something crucial on every aspect of the record. I know that it’s pretty difficult to make a breathtaking new prog album, but this is far from a good effort. It all starts with the vocals by Navid Rashid.

The vocals miss any kind of power and force, while also lacking consistency. On the entire album I can’t find a song that had vocals comparable to another track. He has a very diverse vocal style, sometimes reminding me of Symphony X’s vocalist Russel Allen. Only lacking power and quality. Somehow it feels like the band knows that Rashid doesn’t have a fantastic voice, because they try so many different things. A great part of the opener ‘The Everlasting Sea’ the vocals are drenched in effects.

On ‘A Suicide Aware’ there are parts slightly out of tune. Also on this track are a couple of moment in which you wish his voice would go just a little higher, but he doesn’t. It causes a strangely unsatisfying result. As a depth of this album’s vocals ‘In Spirals’ is almost instrumental, with only samples of conversations to entertain us. Which it doesn’t.

When we go and listen to the music, there are a couple of things that stand out. There are a lot of pretty heavy, but very cliché riffs. Almost every riff sounds like we heard a slight variety of it before. Also, the solo’s sound uninspired, while most of the music is quite average. ‘Prisms’ was the only song that really entertained me and got stuck in my head somehow. The vocals are slightly off, again, but the music is really well done and the lyrics are pretty well written.

I didn’t mention that there are keyboards present on this album, you only got to discover them behind all the other guitars. There are some points in which you can spot some keys, but most of the time they will be hidden in the background. Mostly because of bad mixing, the way it sounds doesn’t give me the idea they did it deliberately.

So it is hard to write a new and original progressive album, but you should start with writing solid and good sounding tracks. That’s the basics of it all. Power-lacking vocals and cliché riffs will not be good enough to reach the top. And stop using these stupid vocal samples that tell us very little. A very disappointing release, the way I look at it. Quite a lot of people have been waiting for this album. Compared to what we wanted to hear, Iris Divine’s ‘Karma Sown’ is most certainly a meager harvest.