Let’s start with a little quiz: Which country do you think the band Russkaja comes from? Exactly, not Russia. With their birthplace marked as Vienna, Austria, this band claims to make polka rock. Yet when I listen to it a couple of times and give it some thought, this band’s product sounds like ska. Why would a rock and metal label like Napalm Records sign a band like this? Maybe their new album ‘Peace, Love & Russian Roll’ gives us the answer.

One thing that I have to mention is the brilliant execution of the entire act and sound that this band has. The music does get a typical Russian sound and the terrible Russian accent of vocalist Georgij Makazaria sounds like that of an extravagant Russian man. With a huge amount of brass instruments and violins, this band really leaves a musical mark.

But after listening to the opening track ‘Rock ‘N Roll Today’ I got totally lost. This is no rock music, this is absolutely not like metal music, so what the heck does this band do, signed on the heavy metal label Napalm Records? Overloaded with brass instruments, fast paced, happy electric guitars and accent laden vocals make it a typical ska act. Ska is a musical genre that originated on Jamaica and is comparable to fast paced kind of reggae.

Don’t judge immediately, because I too like my ska at some moments. In The Netherlands we have a ska band called Chef’s Special that makes some pretty good music and from Spain there is Muyayo Rif that really hits the spot. Russkaja just don’t seem to be good enough to reach those standards. The gimmick seems to get in the way of the music, which makes the album sounds like it’s overloaded with Russian elements. 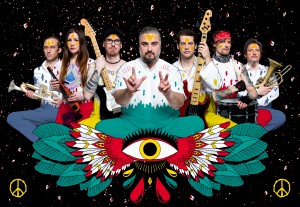 Tracks like ‘Hometown Polka’, ‘El Pueblo Unido’ and ‘Let’s Die Together (Mon Amour)’ are just too much. They sound really Russian, even the Spanish sounding title, but the music is just not good enough. With the wailing vocals on ‘El Pueblo Unido’ as the worst bother of them all. It gives the listener something to wail about and that’s not good. Closing with the fast ‘Peace Love & Russian Roll’ I was completely done, just by listening to this album twice.

What Russkaja does wrong is combining two completely different worlds. Nuclear Records calls it rock music, but it could easily be ska, which is kind of different from the rock section. In my opinion they aren’t good at both making rock and ska music, so maybe Russkaja should focus on one of them for a follow up of ‘Peace, Love & Russian Roll’. I cannot match this band with a metal label like Nuclear Records, but maybe this will change in time.