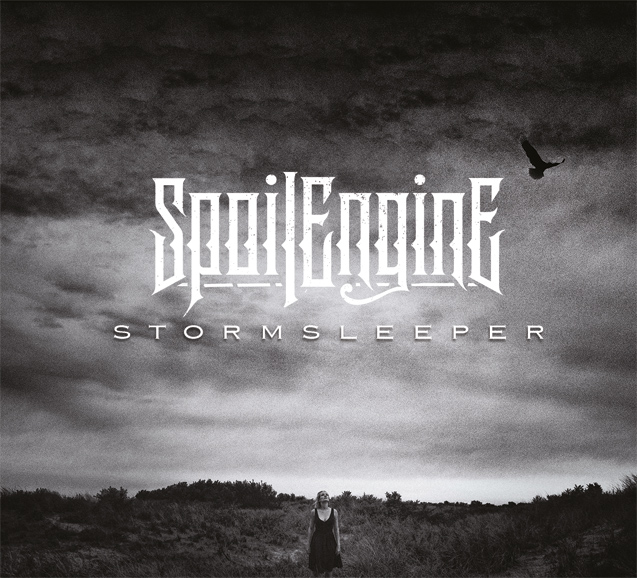 Once upon a time, there was a band that seemed to have something very special going on. With a woman behind the microphone, the heavy Arch Enemy attracted people because of their music, and because of this screaming and grunting female appearance. The music business has changed since then. The metal world has been thoroughly convinced that women can, actually, scream, grunt and gurgle as good, or even better, then men. This is why the Belgian Spoil Engine shows off their freshly appointed vocalist Iris Goessens on their new EP ‘Stormsleeper’.

The true Spoil Engine, with the mighty Iris Goessens added to their ranks

The music business has been, and still is, quite a men’s world. Outside of the genre “female-fronted metal”, which addresses this problem quite well, women seem to be vastly outnumbered by men. But tides are a-changing, with people like Nightwish’ vocalist Floor Jansen speaking out against it. And when the original Spoil Engine vocalist, Niek Tournois, left the band in 2014, the band started auditions to complete their ranks.

With the open mind of a true, modern metal formation, Spoil Engine not only focused on male vocalists, but also cast their gaze on the lovely Iris Goessens. Who makes a stunning appearance on ‘Stormsleeper’. The band’s 2011 mutation with new drummer Matthijs Quars and guitarist Bart Vandeportaele has been successful. Four years after these changes, the band is back on full force, with a strong independent woman behind the mic.

Spoil Engine is out there and it’s a real blast!

The EP itself contains six songs showing the superior Spoil Engine class. From the slow build-up on opener ‘Disconnect’ to its clean vocal intermezzo, to the strange, almost Katatonia like closing track ‘Singing Sirens’. Every little thing feels and sounds exiting, new and made to get you in motion. For example, the single ‘Stormsleeper’ is truly one to scream along to, while you gradually bang your head wherever situation or place you might find yourself.

When I started to listen to this EP, I thought it was a full-length album, which made me ready myself for bashing everything in the music business for claiming that five tracks is enough for an entire album. But one thing that really stood out to me, is that five tracks isn’t enough. Not even on a Spoil Engine EP. When you listen to ‘Stormsleeper’ you only want more, more modern metal, more Iris Goessens and more of the ear torturing riffs of Steve ‘Gaze Sanders and Bart Vandeportaele.

‘Stormsleeper’ takes Spoil Engine back on track. But there’s one thing that these Belgiums have to promise to their fans and followers. There has to be a new album, and it has to be here soon. You cannot make a person addicted and exited over some new EP, without giving it a follow-up. This is step one, this is a promise for a very bright 2016 for Spoil Engine. We want to see them on every single festival stage. This is the result of the rise of the female vocalists, outside of the symphonic metal. This is modern metal at its best and we expect more, much more!