It’s definitely something if a famous producer, like Iron Maiden’s Kevin Shirley, is willing to produce your second album. Not only have you made your presence known with your debut, but you also aroused the interest of international players in the music business. This is exactly what happened with the Australian three piece Tracer and now they’re back with a third full-length record: ‘Water For Thirsty Dogs’. 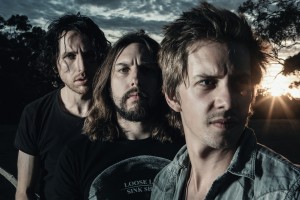 Tracer’s debut album almost gave the impression that Kyuss had come back to life, two records later that sound has definitely changed. Their Facebook page says that “El Pistolero (the second album) saw them forging more of their own identity”. But if the second record gave Tracer its own identity, why do I hear so much of Soundgarden and Audioslave on their third album?

Let me make one thing clear: It’s not like Tracer is exactly copying what the bands I mentioned above are doing. They just seem to be really inspired by them, that’s what the thing is. The opening and title track ‘Water For Thirsty Dogs’ kicks off with the guitar playing vocalist Michael Brown singing the title  sentence. I just couldn’t help but to make the comparison: he sounds a lot like Soundgarden and Audioslave’s Chris Cornell. 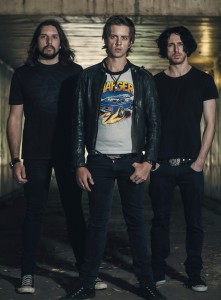 Off course Brown has his own voice, with his personal vocal elements. Luckily he isn’t a one on one copy of Cornell, which is a very good thing. The vocals are spot on and every track has its own vocal highlights. Especially ‘Lazy’, which has a very slow build-up, but is oh-so satisfying. Brown’s slow, deep vocals go very well with the foundation of melancholic music, delivered by bassist Jett Heysen-Hicks and drummer Andre Wise. It’s absolutely stunning.

What’s so very special about Tracer is the ability to write catchy tracks, without ever doing to much. ‘Halfway To Zero’ is a track that I gladly yell along to, while I slowly move to the rhythm of the almost mechanic ‘The Machine’. The latter of the two containing the heaviest refrain of the entire album.
Power ballad ‘Homeward Bound’ has a real air of the American band Alter Bridge to it. The music contains some comparisons, but the melodies also show a lot of resemblances.

Well, I surely hope that this Aussie band isn’t ‘Homeward Bound’ yet, because this album is something that I would definately like to experience live. Kevin Shirley was truly right to produce this band’s second album and gave Tracer the right kick start to produce the third on their own. ‘Water For Thirsty Dogs’ is an all-rounder on stoner rock territory and a must listen for all fans of Soundgarden, Audioslave and comparable eighties stoner bands.