You could say a lot about the pagan metal band Varg, but you cannot say they lack humor. Right before their 2016 release of the new album, the German wolf metallers recorded the ‘Rotkäppchen’ EP. It contains their original, German, little red riding hood track, but also an English, Norwegian and a beer hut version. Long live Oktoberfest, Varg, Germany, ‘Rotkäppchen’ and beer! 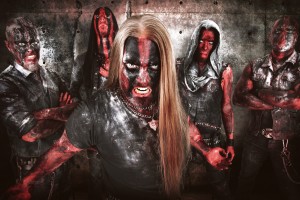 Varg, meaning “wolf” in both German and old-Norwegian language, released the original track ‘Rotkäppchen’ in 2011. It’s quite the shocking experience to hear the story of little red riding hood murdering her grandma, bringing the meat to the wolf and then blaming him for everything that happened. A new view on the originally good ending story.

If you want to compare the new version of the track with the release four years ago, the band included the original as well. When you check the text above, we now already mentioned five of the eight tracks included on this EP. The original ‘Rotkäppchen’, the new version, an English version, a Norwegian version and the Oktoberfest inspired one. And don’t forget the karaoke song! It’s essential if you want your heavy metal beer fest to be a success. 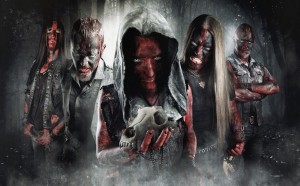 Not that Varg look innocent, just don’t trust them like the wolf on ‘Rotkäppchen’ did!

What remains if we scratch away all the versions of the fairytale are two, brand new tracks. Both of these tracks will not be featuring on the new album ‘Das Ende Alle Lügen’. They are special releases for this little demo that was just released. The first, ‘Ein Tag Wie Heute’ is very heavy and with a lot of deep grunts. Most folk elements are in the bridge, before the refrain, which makes it more of a black/death metal track than a real folk one. The solo, however, is very well done, despite the fact that it doesn’t really match the rest of the track.

Second there’s a track called ‘Abendrot’. A short, fast paced effort that has more of a clean refrain. The German language that Varg uses makes you think of Rammstein, but also the deep, clean vocals gives it a similar vibe. It’s really the better of the two new tracks, mainly because of its speed and heavy riffs.

Varg have exploited the concept of an EP, or demo, in one of the best possible ways. Yes, they re-released a track not once, twice, but five times, yet every version has its own humor and extra touches on different parts of the track. The extra, new tracks are both pretty good and still give ‘Rotkäppchen’ an original feel. The wait till 2016 and their new album isn’t long, until then, prepare for a wholly different kind of storytime!

One thought on “Varg – Rotkäppchen EP”